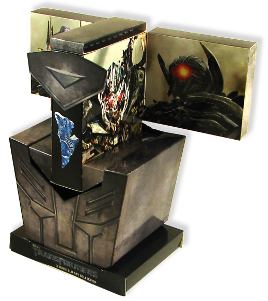 The structure for the Transformers 3-disc Blu-ray Trilogy collection was developed by JohnsByrne Company. It was produced with an innovative assembly that resembles the Transformers "Autobots" logo. The carton unfolds and slides to reveal the movie genre’s 3-disc Blu-ray set and booklets inside. The package is housed inside a PETG cube with support base. See the package in action on YouTube.

The package was chosen as a winner during the 41st annual Key Art Awards held in Hollywood, California in October 2012. The Key Art Awards recognizes the best in entertainment, advertising and communications. This year, 59 judges chose 233 winners from 2,008 entries including, packaging, posters, theater displays, trailers and digital.

Join us to see how shrink rollstock and automated systems can help you to reduce operating costs, boost efficiencies and make your plant future ready.
View All Submit An Event