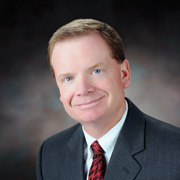 Bryan Hollenbach is executive vice president at Green Bay Packaging, a position he has held since 2011. He oversees the company’s paper mills, woodlands, and corrugated and paperboard packaging divisions. He began his 16-year career with Packaging in 2004 as VP and general manager of its Green Bay Shipping Container plant. Prior to Green Bay Packaging, Hollenbach served as VP of operations for Solo Cup and Hoffmaster/Fonda Group. A 1985 graduate of the University of Missouri-St. Louis, he worked as a CPA early in his career. Hollenbach received his MBA degree from St. Louis University in 1991.

Green Bay Packaging was founded in 1933. It is a privately owned, vertically integrated company that consists of corrugated container plants, folding cartons, recycled and virgin linerboard mills, pressure-sensitive label rollstock, specialty converting operations, timberlands, and a sawmill facility. Headquartered in Green Bay, it operates 32 facilities in 14 states. Green Bay Packaging is investing more than $500 million in construction of a new, state-of-the-art Green Bay Paper Mill, which is expected to become operational in 2021.