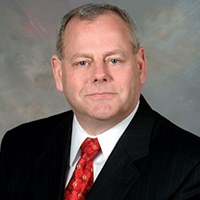 Upon graduation from Indiana State University with a degree in Mechanical Technology, started a career in flexible packaging that has spanned over 44 years with six different enterprises.

In 1994, joined Huntsman Packaging (later became Pliant Corporation) and relocated to Macedon, New York. Huntsman’s second acquisition was the Design Products Division of Mobil Chemical. Led turnaround of business that was losing $6.8 million under big oil company mentality and in eleven months achieved an $8 million turnaround! In 1996, requested to relocate to Corporate Headquarters in Salt Lake City with ultimate responsibility for 20 plants as a $900 million enterprise was built.

Relocated to Newport News Virginia in 1998, to build a new division titled “Key Customer Division”. The key customer was an acronym for focus on Kimberly-Clark who quickly became Huntsman/Pliant largest customer via two strategic acquisitions. In 2000, Huntsman Packaging was sold to Chase Bank and was renamed Pliant Corporation.

Joined Exopack (now TC Transcontinental) in 2003 and led their diversification into plastic flexible packaging as the Senior Vice President and General Manager of the Plastics Group. Led $7.5 million of profitability improvement and expanded customer relationships.

In January, 2005, recruited by the Board of Directors of ISO Poly Films to fill position of President and COO. Led the organization through a major growth strategy that included moving from monolayer and three layer blown coextrusion capability to complex seven layer capabilities while expanding the customer base and markets served into higher value added niches. Increased sales by 45% reduced cash conversion costs by 17% and improved EBITDA to sales ratio by 3%. ISO Poly was acquired by family owned Sigma Plastics in 2008.

On January 2, 2009, joined P&O Packaging, located in Dalton, Georgia, with initial challenge of filling 50% open capacity resultant from demise of economy in second half of 2008. Led diversification by targeting high growth into food packaging, while developing a strong position in stretch hood film and established position in industrial and specialty film markets. Achieved 43% growth, increased revenues from $18 million to $50.5 million, while reducing conversion costs from $0.27 to $0.20 per pound. Retired from P&O Packaging in December 2015.

In July 2016, invited to visit BiologiQ to assess validity of their bio based biodegradable resin with challenge to assist the commercialization of their NuPlastiQ® BioPolymer Resin in flexible, rigid, injection molding, thermoforming and blow molding packaging. On August 1, 2016, agreed to join the team and currently holding position of Vice President of Sales.