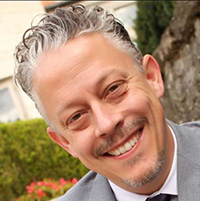 Paul Unrue is the President of Atlapac Corporation, located in Columbus, Ohio. He is an equity owner of Atlapac and has been a part of the executive team since 2008. Initially, Paul was hired to head up Sales and Marketing as Vice President. In 2016, Paul was promoted to President. Atlapac has grown from about 40 employees in 2008, to 100 employees and growing in 2022. Atlapac is a plastic bag and pouch manufacturer. Atlapac forms bags from your local farmers market all through the packaging supply chain (grocery, club stores, etc.). Paul has 32 years’ experience in the packaging industry and earned his bachelor’s degree in Package Engineering from Michigan State Packaging Alum 1991.

Paul’s experience in packaging began in 1990 when he spent his six-month Internship at Multi-Color in Cincinnati as an R&D engineer. There he started his career in offset, roto gravure and flexographic printing and laminating. After graduating in 1991, Paul spent the next 22 years in various sales and marketing roles throughout the flexible packaging supply chain. Paul started his career in sales by selling base packaging films to thermoforming companies (think battery packages), and numerous flexible packaging converters. He then went on to become an equity partner at a start-up in-mold labeling entity in Cincinnati (bought out by Multi-Color). Over the next couple of decades Paul was part at a regional flexible packaging converter selling printing, lamination, pouches, and roll stock. He was promoted to Vice President of Sales before moving on to Atlapac.

Born and raised in Michigan, Paul has resided in Ohio since 1991. Happily married to his wife Cara, Paul is active in yoga and does CrossFit 3-4 times a week. He is very proud to have three children who are almost all adults now. Along with his wife and two dogs, Paul enjoys spending his weekends at their family cabin in Southern Ohio. He is eagerly awaiting future grandchildren that will most certainly enjoy Grandma and Grandpa’s cabin as well.