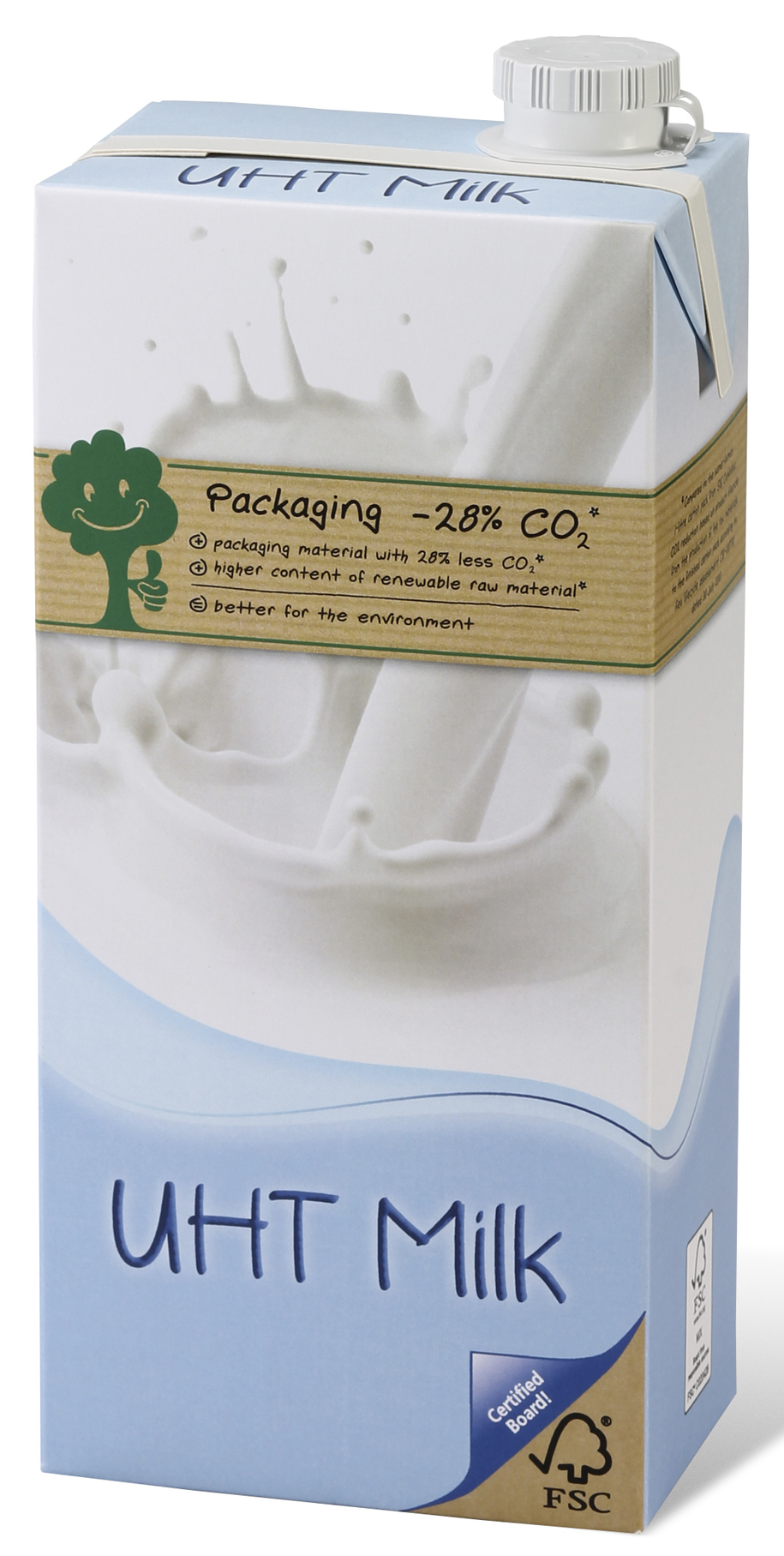 The crucial factor that means the combibloc EcoPlus packaging material generates less CO2 lies in the special material composition, which differs from other beverage cartons. At more than 80%, the main component of the composite structure is a special type of raw paperboard based on wood, a renewable and entirely bio-based raw material, which gives the carton pack stability. Thanks to its special properties, the paperboard ensures that the products filled in the carton pack are protected from light. The FSC® label (Forest Stewardship Council®) on all combibloc EcoPlus carton packs assures the consumer that the wood fibers processed to make the paperboard come from FSC-certified forests or other controlled sources.

With combibloc EcoPlus, a special new, razor-thin polyamide layer serves as an additional barrier to protect the product from flavor loss and external odors. Added to this are fine polyethylene layers inside and outside. The inner polyethylene layer forms a liquid barrier for the product; the outer layer keeps moisture out.Owing to this material composition, combibloc EcoPlus generates 28% less CO2, compared to a conventional 1-liter carton pack from SIG Combibloc of the same format (based on the life cycle of the carton pack from the production of the raw materials to the finished carton pack). This plus for the environment has been proven in an independent, ISO-compliant life-cycle assessment.

The screw cap combiCap is based on a process developed by SIG Combibloc that has already become internationally established in use with other SIG Combibloc closures. The screw cap is applied on an over-coated hole. At SIG Combibloc’s packaging plants, holes of the correct size are punched in the raw paperboard before it is laminated. Thus the closure, which is applied to the carton pack after the product has been filled, can be easily opened by the consumer with a single twist, as the cardboard layer has already been removed and only the thin polymer layers need to be opened.

The closure consists of a flange with integrated cutting ring and a screw cap. With a single twist of the screw cap, the tamper evidence feature on the original seal is broken with an audible click. The tamper-evidence feature allows consumers to clearly identify whether a carton pack still has its original seal intact, or has already been opened. To re-close, the cap is screwed back on. And the carton pack remains leak proof.

But it is not just its light weight that sets combiCap apart. Europe-wide consumer tests have shown that the cap is easy to open, and offers a good pouring action. “We wanted to make sure the consumer doesn’t have to compromise. He should be able to get a carton pack that is convenient and eco-friendly. And with combibloc EcoPlus, we’ve managed to do just that”, says Jevremovic.

Amcor to highlight plastic and carton packaging at Pack Expo