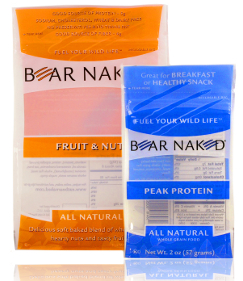 There’s something for everyone in the Bear Naked Granola success story; two aspiring and charismatic “twenty-something” entrepreneurs chasing the American Dream; a product that touches the hearts, minds and taste buds of health-conscious consumers; and a name that tickles everyone’s funny bone.

Achieving that dream took plenty of hard work, many late nights, and the support of committed supply-chain partners, working behind the scenes to help drive the growth of Bear Naked Granola.  One modest but highly resourceful “brand behind the brand” is a flexible packaging company named LPS Industries (lpsind.com).

The Bear Naked story is especially worth revisiting because of its pivotal role in the phenomenal growth of the granola category in the last decade.  According to Nielsen data, the segment grew from $129.5 million in 2004 to $208.6 million in U.S. food, drug and mass merchandiser stores by 2008.

Bear Naked was one of the first brands to package granola in a flexible stand up pouch.  “We were initially contacted by Bear Naked’s co-packer at the time, with whom we had a long and close working relationship. A request came in for a small quantity of clear recloseable pouches,” said Domenick Pasqualone, vice president of sales at LPS Industries. “At the time, and given our relationship with the co-packer, the request was nothing out of the ordinary,” he added. Little did LPS Industries, the co-packer or any of the other supply chain partners that would come to serve the Bear Naked brand know what was about to happen next.

The Bear Naked story began in 2002 when a chance meeting between two former high school friends from Darien, Connecticut, Kelly Flatley and Brendan Synnott, resulted in an unexpected but immediate business partnership.  In the early days the pair sold their granola from a folding table at local flea markets, craft fairs and at neighborhood grocery stores.

Their marketing strategy included presenting their product in a clear pouch to promote its quality and attractiveness. Customer response was extremely positive and it wasn’t long before their determination began to pay off. Soon after the initial small quantity order of pouches, the co-packer placed a larger rush order with LPS Industries to which labels for brand and product identification were later applied.

“Our relationship with the co-packer dates back to the 1970s, so we were well positioned to work in conjunction with them to support Bear Naked,” says Pasqualone. “Because of the relatively short timeline from packaging to consumption in the early years of the product, barrier protection wasn’t a primary concern. For Bear Naked, and for similar entrepreneurial brands just starting out, our selection of stock recloseable polyethylene pouches serve as an ideal starter solution.”

Before long, Kelly and Brendan’s persistence resulted in their first big break – shelf space in Stew Leonard’s, a Connecticut-based supermarket chain. Several months later, Food Emporium signed on, adding its 40 stores throughout the New York metro market. The unique packaging format made the brand a standout on store shelves and soon, legions of loyal customers began spreading the word about Bear Naked Granola.

Two years later, with clients including Target, Costco and Kroger on their roster, Bear Naked was faced with a new set of packaging challenges.  First came filling mass production orders to satisfy an expanding distribution network.  The volume required the co-packer to move to form, fill and seal production and LPS Industries responded by supplying the co-packer with rolls of webstock and spools of zipper they extruded to ensure perfect bonding with their webstock, removing a potential problem in the production line. As often as not, production and deliveries were on tight shipping schedules.

As shelf life requirements made it important to extend product freshness from weeks to months, a change in film material was required to provide sufficient barrier protection throughout the life of the product. Pasqualone adds, “To further preserve product integrity, we worked with the co-packer to identify the best solution, and developed a stronger lamination to meet their preservation requirements.”

The first five months of 2005 brought the fastest growth of the brand to date, as Bear Naked reached distribution in more than 10,000 retail locations. They were manufacturing 30,000 12-ounce bags of granola a day with sales approaching $65 million annually. As demand continued to skyrocket, it became increasingly evident that a printed package with new graphics was the next evolution of their stand-up pouch. The final design was energetic, yet simple. It reflected the purity of Bear Naked Granola’s ingredients and appears on the company’s packaging to this day.

During this time, LPS Industries continued to serve Bear Naked’s packaging needs in several important ways, providing technical assistance for the execution of the new artwork, and working with manufacturing partners to help facilitate the conversion from applied labels to the printed graphics.  LPS Industries also manufactured and supplied the printed rollstock for multiple SKUs and multiple graphic schemes in multiple sizes.

“We had the capabilities and the capacity, which helped to strengthen an already great relationship. As they continued to grow, we continued to respond,” recalls Pasqualone. “Plus, we were located in close proximity to the main offices of both the co-packer and Bear Naked. Brendan would regularly stop in, approve press runs, and the order would ship shortly after that.”

Teamwork as the key to success

Within a span of five years, Bear Naked Granola had rocketed from “Who?” to “Wow!” with consumers. The brand had expanded to include a line of all-natural/organic Trail Mixes. Packaging orders to LPS Industries increased from lots of 1,000 to 15 million impressions annually.

While Kelly, Brendan and their entire team tirelessly drove the brand to national sales prominence, an equally important team continued to work with them in the background; a group of supply chain partners, similarly committed to making things happen for everyone involved.  It included food contract manufacturers, retailers, distributors and the flexible packaging manufacturers who had demonstrated the experience, resources and capacity to grow with them. The formula paid off handsomely for the “granola giant” in late 2007 when the Kellogg Company acquired Bear Naked for a substantial but undisclosed sum.

“LPS Industries shared in their passion for the brand, doing whatever we could to support their growth and success,” concludes Pasqualone. “We remained a valued packaging partner with Bear Naked Granola for many years following their acquisition. Today, thanks to the iconic package we helped them introduce, we continue to receive frequent inquiries for stand up pouches from organic and specialty food companies. They often comment, ‘We want the Bear Naked bag.’”