The maverick who gave rise to social marketing now has his head in ‘the last frontier.’ 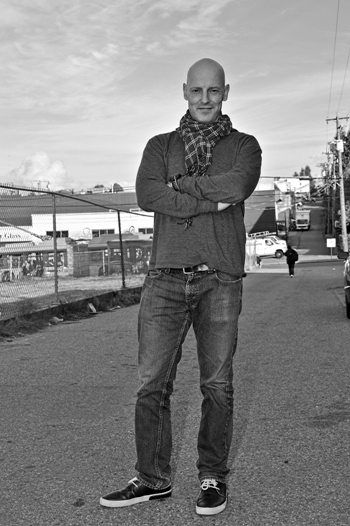 We last talked to Peter van Stolk in '06 when he was founder/CEO of Jones Soda Co. He's now CEO of Sustainable Produce Urban Delivery, or SPUD.
We looked back on the people we’ve championed over the years as BrandInnovators. And we chatted with some of our favorites to find out what’s new in their worlds and, with the objective of informing our own, what’s next. Here, we talk to Peter van Stolk.

We last talked to Peter van Stolk in '06 when he was founder/CEO of Jones Soda Co. He's now CEO of Sustainable Produce Urban Delivery, or SPUD.
It wasn’t long after Peter van Stolk founded Jones Soda Company in 1996 that he started making waves with irreverent branding and unique, grassroots marketing. Jones was one of the first brands to crowdsource and co-create with consumers, turning out in-your-face graphic bottle labels from their submitted photos. The pioneering social approach resulted in undying brand loyalty-something global beverage giants could only hope to achieve.
Van Stolk has since moved from beverages to spuds and tomatoes – he is the largest shareholder and CEO of Sustainable Produce Urban Delivery, or SPUD, an online organic grocer with locations across Canada, and in San Francisco, Los Angeles and Seattle.


BP: You were ahead of your time reaching consumers at Jones.
PVS: That was one of the things we were very good at-knowing that people wanted to be part of the process and part of the brand. Nowadays, with all the social media available, you have everyone doing that, even though, in my opinion, it’s on the tail end of the wave.
BP: So, what’s next then?
PVS: It has to come back that [a brand is making] an emotional connection on something more relevant than just your social number of friends. You have to go back to being real and align yourself with values that your core audience appreciates.
BP: Like the road you’ve taken with SPUD?
PVS: There’s a model of food online … you know, where there’s this wonderful, really expensive ‘we’re going to ship you great dry aged beef from somewhere far away’ and then there’s ‘we’re going to send you local organic produce tomorrow.’ And I want to do the local organic produce tomorrow.
I’m also fascinated by categories that really haven’t shown a lot of growth. In the US, online represents less than one percent in the category. But if you look at online grocery in Europe, it’s huge-it represents double digits. I’m really excited by this, because it’s sort of this one last frontier.
BP: Kind of like Jones was … what was it like to move on from the company you founded?
PVS: It’s like a bad divorce. From the people side-the people I worked with, employees I hired, it was really hard. And the whole board [of directors] power thing was interesting. You had a group of people who had nothing invested in the company but were making all these changes.
And it was also about the vision… CEOs are like cats and they always have to pee on [their predecessor’s plans].
BP: In what way?
PVS: We were really far ahead from a marketing standpoint. We were one of first brands to sponsor alternative athletes like Tony Hawk. We did that whole RV thing. And our partnerships were really unique. And then, the first marketing plan they did when I left was to work with CBS on March Madness. That was a challenge.
And it was realizing that the beverage industry is like fashion-you have to constantly come up with something to capture someone’s attention.
BP: Should packaging play a role in that?
PVS: It has to. There are three things I look at. Is it relevant? Does it create emotion? And, then, are you gonna talk about it? If you have those three things, then you have a shot.
BP: You’re also an advisor to beverage companies – is it tougher running upstarts today?
PVS: Oh yeah. Way tougher. No question. Before, the game was, ‘we’re going to come up with something different.’ But now larger companies like Coke and Pepsi are in coconut water, isogenics, organic teas …it’s really hard to get that running room.
BP: Is there still room for the little guy?
PVS: There’s always room for the little guy … if the little guy plays by their own rules.
BP: Who’s an example of that?
PVS: Where I’ve been looking is not for profits. In Canada, there’s Because I’m a Girl; they’re trying to convey the message that if women had more power the world would change. There’s also a group in San Francisco [Culture Kitchen] using immigrant women in a cooking school for affluent Americans.
BP: Like ‘this is how you boil water’?
PVS: [laughing] Yeah. But it’s also about trying to create that emotional connection. If I can figure that out with SPUD, it’s going to go to the moon.
One thing we’ve done right – again, it’s the early stages – we’ve created a community outreach program. We deliver food to your door with a returnable box. And you can put anything you want recycled back into that vessel; we pick it up the next time we deliver your food. It’s this complete cycle. And it’s like, ‘hey, this is easy.’ That’s where I think it’s really cool.
BP: It is. You’re clearly on to new and bigger things!
PVS: Yeah, I don’t know if it’s bigger or newer, but it’s not selling sugar water.
BP: So…do you still drink Jones?

PVS: I was in my daughter’s room the other day-she just went off to college-and saw Jones soda bottles with a picture of her from every birthday. I’ve never looked at a bottle of Coke like this, but I’m sure I’m not the only one who can look at a bottle of [Jones] and smile. I think that’s one of the coolest things we did. [PH]

Where are they now: Former GlaxoSmithKline VP Donna Sturgess

Where are they now: President/CEO of Honest Tea Seth Goldman