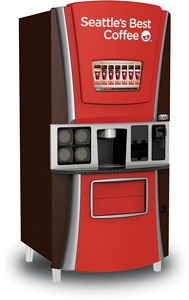 Coinstar and Seattle’s Best Coffee are making your daily cup of joe more accessible. The two companies have created Seattle’s Best Coffee kiosks, also known as Rubi, which will dispense a variety of single-cup coffee options, ranging from a brewed cup of coffee to mochas and vanilla lattes. The Rubi coffee kiosks will initially be available this summer in grocery, drug and mass-merchandise stores in the northeast and west coast regions. However, the companies expect to install Rubi in thousands of locations nationwide over the next several years.

The future of vending?

The Vending Machine is Back...