Order Reprints
No Comments
Coca-Cola is testing 100 percent recyclable merchandise racks and then working with retailers to recover and reuse them.

Part of a new closed-loop program for merchandise displays, the so-called “Give it Back” shelving serves as a physical manifestation of Coca-Cola’s environmental efforts for shoppers-and it’s designed and finished in a way that makes a tangible connection to their desire for more sustainable options.

The company followed three key design principles in developing the laminated corrugated racks. Vince Voron, vice president of design for Coca-Cola Refreshments says the shelving incorporates “an alluring overall form [not found in most other displays], iconic material finishes that communicate sustainability and brand messaging zones that are both integrated and modular.”

Entirely recyclable, the racks are made up of about 30 percent recycled content. More than 50 percent of the shelving materials are renewable wood or cellulosic fibers sourced from Sustainable Forestry Initiative-certified managed forests. And 100 percent of the virgin paper used for the racks is produced from SFI-certified forests. 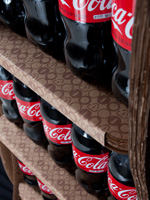 The displays are the first in a family of recyclable displays that Coca-Cola is developing, according to Karyn Froseth, director of shopper marketing for Coca-Cola Refreshments. “We are building a comprehensive, closed-loop retail equipment program where Coca-Cola creates recyclable in-store merchandise racks and then recovers, reuses or recycles [them]," she says.

After the shelving is used, Coca-Cola will pick it up from the store, take it to one of its centralized recycling areas and put it into the corrugated stream where the materials might find new life in another “Give it Back” rack or as a corrugated shipping box.

Implementing a closed-loop process with retailers and designing with recyclable materials improves the chances that Coca-Cola's displays will not go to a landfill, the company says (the company reportedly diverts more than 90 percent of its waste at its primary US manufacturing facilities).

Currently being tested in Chicago and Kansas City, Mo. – 10 stores per market - the Give it Back racks are expected to roll out to grocery and convenience stores nationwide this fall. A rack made entirely of recycled PET is in development and slated for testing later this year.

Coke puts fans on the can in Australia