Why Dr. Pepper Ten is everything that's wrong with brands

Order Reprints
No Comments
A lame 10-calorie soda probably wouldn’t be getting talked about as much as it is right now if it wasn’t so blatantly offensive and crude. 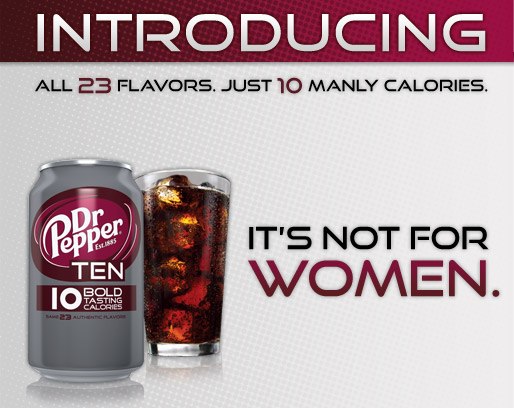 With the tagline, “It’s not for women” and a campaign that acts as a watchdog for girly behaviors like saying “OMG,” the new ad campaign for Dr. Pepper Ten is actually enough to make me refuse to buy Dr. Pepper. My co-workers said that I was playing into the brand's plot by not drinking it, and that a smart counter-strategy would be to make it the drink of Real Housewives or promote the idea that it cures menstrual symptoms.
Since I cannot enact such reputation-destroying initiatives as one single woman, I will still refuse to buy it, because I would simply be driving sales.
This product doesn’t just bother me for its sexism – it bothers me because it’s stupid in so many ways.

1. They missed a simple insight about the aesthetics of diet

Good magazine described the can as “gunmetal gray,” which makes it sound like Dr. Pepper put thought into the color. But if they had, they would have realized gray is the color of girly diet sodas.
I associate gray cans with my parents’ Diet Coke, which to my childhood self was a lackluster alternative to regular Coke. The loss of bright and bold colors for a simple gray implies deprivation – the kind of mentality you don’t want to think about when you’re making a healthy choice.
That’s why Coke Zero has been so successful – it looks like a regular soda to the point that I actually have to double check the nutrition label sometimes. Despite being marketed at men, many women like Coke Zero because of this. (And the taste.)

2. The 10 calorie area is less than alluring

I haven’t done official research on this, but I don’t see how ten calories could distinguish a soda as something more exciting than a diet drink. One teaspoonful of sugar has about 15 calories. This means there is less than one in Dr Pepper Ten, whereas most sodas have approximately nine teaspoons of sugar. It’s not going to taste more like sugar than aspartame.

I noticed that Coke tried to make VitaminWater 10 its diet drink before finally giving in and releasing VitaminWater Zero. The “zero” seems to be an alluring point for both men and women, as it implies certainty over calorie content and impact on health. Regardless, the 10 strategy for Dr. Pepper breaks down in a bottle, because the bottle format contains 2.5 servings and, thus, 25 calories.

3. This is a 'negative publicity is still publicity' campaign

A lame 10-calorie soda probably wouldn’t be getting talked about as much as it is right now if it wasn’t so blatantly offensive and crude. But that’s a short-sighted strategy for launching a new brand.

A cornerstone of a brand should be that it is guided by real values that people can connect with, and that its actions express these values more than simple messaging gimmicks. Starting with a value of sexist inclusiveness is not one that will create an aspirational halo on your product, except that it will become associated with small-minded men. Mature men aren’t afraid to be associated with diet soda anymore.
Becky works as a creative at Zeus Jones, specializing in copywriting, content creation and blogging.

Colleges Are Brands (And Packaging Is Everything)