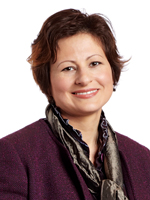 It’s unlikely that Nadia Shouraboura’s fellow PhD candidates at Princeton would have imagined her moving on to a role where she’d be receiving photos from a man wearing an outfit made entirely of twist ties.

His reason for such an uncanny display? Nothing sinister, just an offbeat way to express his irritation struggling with the coated, metal wires on packages he’d ordered through Amazon, where Shouraboura serves as technology vice president of worldwide operations. The photo was one among many that have informed Frustration-Free Packaging - a global initiative led by Shouraboura to make it easier for customers to liberate products from their packages and combat “wrap rage.”

The program is the most public-facing of Shouraboura’s responsibilities. She manages the technology that powers the online retailer’s global supply chain and fulfillment efforts-where she brings more than 20 years of heavy-hitting technology experience to bear.

Born in Soviet Russia, Shouraboura started out as a software developer for industrial robotics in Israel, where her work caught the attention of professors at Princeton. Offered a full scholarship for study and research, Shouraboura earned a PhD in mathematics and then signed on with a series of companies - from JP Morgan-backed startups to Fortune 500 companies - to blaze new territory in technology, mobile connectivity and energy trading (where she’s considered a pioneer).

In 2004, Shouraboura joined Amazon - another company known for its technology innovations - and began applying her finely-honed technical skills to very human realities: simply put, her charge is to delight Amazon customers with the right packaging experience for every order. 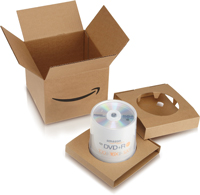 One of Amazon's 15,000 distinct items that is certified as frustration-free.
A big part of that, of course, is the unboxing process - something that Shouraboura says her team is working to “make really effortless” through frustration-free packaging.

The initiative itself first took shape back in 2007, when Amazon colleagues were catching up after the Christmas holiday and company founder Jeff Bezos came in with stories of how he spent Christmas morning in agony opening gifts and toys for his children.

“That feeling resonated with almost everybody in the room,” says Shouraboura. “I distinctly remember that moment.” It was such a simple idea, she says, that, “we just decided to do something about it.”

Shouraboura launched a dedicated team to go after the problem. With their own gift-opening experiences as the foundation, they approached manufacturers like Mattel, Fisher Price and Microsoft and targeted 19 best-selling items for a revamp. Those products debuted in November 2008 in packaging devoid of the plastic clamshells and coated wire ties commonly cited as the source of frustration among colleagues.

Then, thinking that customers might add to the conversation, Shouraboura’s team invited consumers to share their packaging experiences. And they stumbled on a goldmine. “There was amazing feedback,” says Shouraboura. She spent hours pouring over the comments and the images that frequently accompanied them. Many were creative, like “twist-tie man” and those who mockingly sent images of giant package-busting scissors and chainsaws. One customer, who had actually ordered scissors from Amazon, asked whether he needed to order another pair to free the original product from its protective armor.

“Out of great customer feedback-and out of their jokes-we made a direction for the program,” Shouraboura says. “We followed the voice of the customer.”

Of course, Amazon is in a unique position to listen to its customers, but, with Shouraboura’s help, the company has been working with manufacturers to bring about significant change. In November 2009, the program boosted the number of Frustration-Free items by launching a certification element-where Amazon engineers analyze a company’s package and either certify it or recommend changes-that makes it easier for manufacturers to take part.

“A lot of people are passionate about [the program] across Amazon. It spans our customers, our manufacturers, our partners, as well as many teams within Amazon-from our buyers to our transportation team to our fulfillment center-everybody.”

And, these days, the 15,000 distinct items certified as frustration-free go beyond easy-to-open packaging lacking clamshells and twist ties (blister packs are a no-no too). There’s now an environmental element: Frustration-Free items are closely matched with right-sized boxes, which are recyclable, serve as the primary shipping container and contain less packaging material overall.

There are likely other similarly valuable insights among the six million packages that Shouraboura reports have been rated year to date. And while some would consider that figure-and the 15,000 distinct frustration-free items-a success, she clearly has greater ambitions. “We have a ways to go,” Shouraboura says. “We’ll be done when every item we ship comes frustration free.”

DataLase Named Innovator of the Year at Innovation Excellence Awards