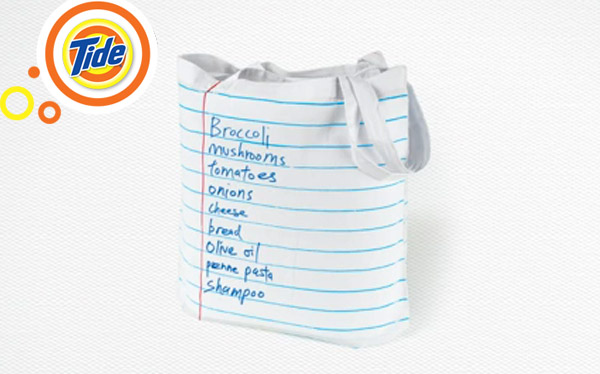 What do you get when you cross a shopping bag with a grocery list? A smart promotion developed by Tide and its Dubai agency, Leo Burnett.

Prompted by news that the United Arab Emirates is phasing out all non-biodegradable plastic bags by 2013 (the country reportedly consumes 12 billion of them each year), the brand developed a washable  tote to inspire plastic-bag-free shopping and, in a clever twist, to simplify the task by doubling as a grocery list.
The shopping tote takes on the look of a ruled-line notebook, with consumers using a marker to write each grocery item directly on the bag. The marker washes off in the laundry (presumably with Tide), preparing the bag for its next use.
The bags were given out, along with a marker and a box of Tide, to customers from the brand’s database, and to fashion editors, prominent bloggers and environmental organization leaders. The promotion generated such a positive response that Tide is developing the bags for regional distribution.
Concept: Leo Burnett Dubai

Pouch Doubles as Bowl with Spoon in Packaging

A Brand Millennials Love as Much as Apple: Trader Joe's

What's the biggest challenge holding design back as a key business strategy? Is “design thinking” a term we should use to explain the power of design to the C-suite?