The packaging integrates tamper-detection features and a sustainable design. 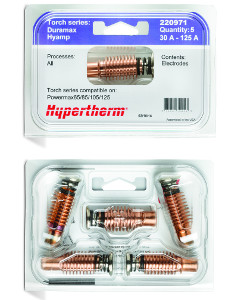 Earning three Ameristar packaging awards in two years, Placon, a designer and thermoformer of custom and stock packaging for the retail, medical and food markets, is continuing to earn high marks for its creative, economical and safe packaging designs, according to the company.

With a 20 percent overall reduction in the size of its footprint, the Hypertherm consumables’ packaging, previously manufactured in PVC material, is now designed with Placon’s EcoStar brand of post-consumer recycled PET rollstock. The 100 percent recyclable packaging now contains a minimum of 50 percent, up to 100 percent, curbside collected, post-consumer content from curbside-collected PET bottles and thermoforms.

Collaborating closely with Hypertherm, a leading U.S.-based designer and manufacturer of advanced plasma metal cutting systems, Placon worked to design creative, overt methods of tamper detection into the packaging, allowing suppliers and consumers to authenticate a genuine Hypertherm package from a counterfeit product.

The clear plastic clamshell has a secure 360 degree seal with a Placon patented retaining snap feature on the inside of the lid, to hold the graphic card securely in place. When the clamshell is filled, the hang-hole area is ultrasonically welded, affixing the lid to a perforated area on the base of the thermoform. Once opened, the perforated area is broken off of the base, permanently affixing itself to the interior of the lid, “trapping” the graphic card.

The tamper-evident design allows consumers to visually see the “broken” hang-hole tab area, alerting them that the package has been tampered with. The feature also makes it difficult for counterfeiters to not only repackage the clamshell but to repurpose the graphic card as well. Attempts to slide the graphic card out of a package with a broken seal will result in ripping the card, rendering it unusable.

“Many companies, like Hypertherm face a major issue in counterfeiting, an ongoing concern for companies and their brands,” states Jeff Baillies, senior concept designer, Placon. “We paid critical attention to the packaging design in order to help customers identify genuine Hypertherm packaging while also protecting the package against duplication by making it more technically and financially challenging to replicate by counterfeiters.”