Micro cutting gave a package produced on the Highcon Euclid an attractive look and feel. 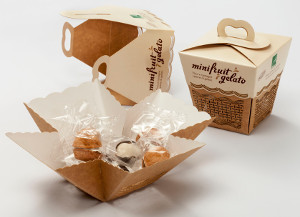 Last year was a banner year for Highcon. Five years after it was founded, the company saw numerous installations of its Highcon Euclid digital cutting and creasing machine around the globe and many awards demonstrating the machine’s capabilities.

At Interpack in Dusseldorf in April, Glossop Cartons received the WorldStar Award for Packaging presented by the World Packaging Organization. The award was given for the wine box designed and produced by Glossop Cartons. The wine box demonstrated clearly the design flexibility enabled by digital finishing with intricate cutouts and cuts over creases.

In September 2014, just as the Highcon Euclid II series of machines was announced, Pringraf SRL won the 2014 ECMA Pro Carton Award for a Gelato Box in the Food Category with a package produced on the Highcon Euclid. The judges agreed that this was an excellent way to pack ice cream snacks with some very clever micro cutting, through which it was possible to see the contents, to give the carton an attractive look and feel. As one judge remarked “I just cannot stop playing with it — it is excellent.”

This box was also nominated for the WorldStar award, and won the Luxury Packaging Best in Show award, as well as the Earth Island 2014 Solutions Award in the Environment Category.

On the other side of the ocean, in Chicago, at Graph Expo 2014,the Highcon Euclid won the Best of Category in the Future of Print category in the Must SeeEms Award for the year of 2014.

Meanwhile, back in Europe, in Sweden, Gafs Kartong were announced winners of the Empack visitors most innovative packaging design award for its wine bottle package that demonstrates extreme cutting — also performed on the Euclid.

This innovative new technology delivers the innovation and differentiation that converters, printers, brand owners and retailers alike, are looking for, transforming “finishing” into a value-adding process.

The Highcon Euclid has many benefits, according to the company:
• Infinite Design Flexibility
• Faster Time to Market
• Increased Efficiency
• Digital Storage
• Increased Sustainability

To see other examples of products produced on the Highcon Euclid, click here: http://highcon.net/data.asp?id=65.