Order Reprints
No Comments
How brands like Gerber and Chips Ahoy! are using neuroscience to study shopper emotions, understand purchase motivations and improve their package designs.

Few would dispute that emotion plays an important role in packaging. In a world of overwhelming choice, with hundreds of products in each category, shoppers simply don’t have time to consider all the options and can’t rely solely on rational, fact-based product comparisons. Instead, they sort through items quickly-and the packages that “break through” and make an immediate connection are most likely to end up in the shopping cart.

That’s why we’ve partnered with EmSense, a neuromarketing firm, to bring the study of emotions and cognition to package research. Without question, neuroscience represents a promising new research tool, which may offer a window to a greater understanding of shoppers’ motivations and, ultimately, a path to better packaging. By looking at EEG readings that reveal emotions (positive or negative feelings) and cognition (the amount of thought), marketers and designers can use neuroscience as a diagnostic tool and a source of design inspiration. And by linking these measures to our eye-tracking data, we’re able to help them develop packaging that engages shoppers, makes an emotional connection and, ultimately, drives sales.

Pre-design research revealed negative emotional reactions (indicated in red on the image above, right) to the visual icons indented to convey baby stages, and to less-than-prominent health claims.
For Gerber baby products, we used neuroscience in pre-design research to get a baseline assessment of the brand’s existing packaging. We wanted to confirm its strengths and limitations against the competition and identify opportunities for improvement.

As might be expected, the study reinforced the power of the familiar Gerber branding and baby visual. But the research also uncovered negative emotional reactions to various graphic elements, including the visual icon intended to convey baby stages, the benefit bands and less-prominent health claims. These reactions suggest either confusion in interpretation and/or difficulty reading smaller print. Taken collectively, they spoke to a need to “clean up” and simplify the packs, to make them more accessible to shoppers.

We have also used neuroscience to help filter potential design directions for a new own-brand of food products from a major retailer. We found that, while a scripted logo treatment for this new brand was visually impactful, it was far less emotionally engaging to shoppers than a more traditional style. Similarly, a more concise product depiction was more cognitively engaging and emotionally positive than more extensive approaches. These insights guided the development of the packaging and brand identity that were later launched to market.

Neuroscience insights led to significant refinements in the new Chips Ahoy! packaging - and resulted in an improved version being launched into market.
Neuroscience has also been helpful for larger, on-shelf evaluations. When we worked on a new packaging system for Chips Ahoy!, we gathered shoppers’ emotional and cognitive reactions to both the current and proposed design systems. While the proposed system met many of Kraft Foods’ primary design objectives for the brand, neuroscience research revealed several opportunities for enhancement.

For instance, resealability was known to be a valued feature, but the resealability claim itself was driving negative emotional reactions; it was too jarring on the current packaging and too difficult to read on the proposed. The cookie visual on the proposed packaging was also problematic. Despite its prominence, it didn’t appear to be effective because it only drew neutral reactions. These insights led to significant refinements to both design elements prior to launch. The resealability tab was made more legible, while the cookie visual was given more energy with flying chips visuals.

Of course, neuroscience can do more than identify the design elements that are inadvertently driving negative reactions. It has another role in helping us understand why a design isn’t working-to discern the underlying factors driving poor performance.

For instance, in a personal care product study, we conducted an on-shelf shopping exercise which revealed that a proposed design system was not working. Neuroscience suggested that the changes in cap color and on-pack messaging were the likely drivers. In a frozen food study, a proposed design system tested poorly; we found that removing a familiar brand character from the packaging had a negative emotional impact. In a cereal study, neuroscience measures uncovered that a brand’s current packaging was not connecting emotionally with shoppers and was the probable driver of recent sales declines.

In these case and others, the pattern is clear: On-shelf measures (purchase patterns, etc.) tell us which packaging systems are working and neuroscience measures (among others) help us uncover why.

And while it’s best to be cautious in generalizing across brands and categories, we have seen several consistent drivers of negative emotion toward a packaging system. Take, complexity. Negative reactions appear to be linked to instances when shoppers are being asked to work “too hard” to decipher packaging (usually due to small print or unclear messaging). We also know that it’s critical to get the food visuals right, as slight changes can have a significant impact. For example, we’ve found that something as seemingly minor as omitting the rising steam from a hot entrée visual or not properly executing the “cheese pull” on a frozen pizza drove negative emotional reactions toward packages.

In addition to identifying which elements need to be fixed, and why, neuroscience can often help us uncover alternative approaches (more appetizing food visuals, more relevant claim treatments, etc.) that were more compelling-and were ultimately incorporated into new packaging.

Of course, we are still in the early stages of using neuroscience in packaging research and we have many issues to explore, including the differences in emotional reactions across product categories and cultures; the role of context versus universal approaches; and the link between emotion and purchase decisions.

However, based on our experience, we can offer several guidelines to marketers and designers for getting the most value from neuroscience research. First and foremost, researchers should use neuroscience in conjunction with other packaging research tools, rather than as a replacement for them. It’s also important to avoid thinking in terms of absolute measurement (i.e., the most “emotional” design). Instead, the focus should be on understanding reactions to design elements and using this learning to optimize packaging. Finally, neuroscience insights are most valuable if they are gathered early in the design process rather than at the end of the process, when the primary objective is to validate and there is less opportunity to make fundamental changes.

When marketers and designers use neuroscience in this way, they can develop packaging that resonates emotionally and also performs effectively on shelf (ensuring visibility and shoppability, which we’ve long known are the keys to driving purchase).

Without question, neuroscience is very promising. It has the potential to be a powerful diagnostic tool that uncovers shopper reactions to specific package design elements, identifies why they’re not working and suggests compelling alternative approaches. By understanding the “why” behind shopper emotions toward packaging, neuroscience can help brands make stronger connections and, ideally, drive more sales.

Scott Young is president of Perception Research Services, International (www.prsresearch.com), a company that conducts more than 800 consumer research studies annually to help marketers win at retail. Scott can be reached at syoung@prsresearch.com or 201.346.1600. 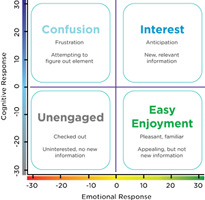 Generally speaking, marketers and designers would like to see their packages fall in the “interest” quadrant (with positive emotion and high cognitive engagement). However, we’ve found that many successful packs, particularly for CPG products, fall into the “easy enjoyment” quadrant, suggesting that they serve as positive, comforting reminders of familiar brands, without demanding significant thought. The more concerning examples are those that drive confusion (high cognition and negative emotion), which often ties to frustration or direct rejection of a package.

So, how do we actually measure and analyze shoppers’ emotional responses to packaging? Through an unobtrusive headset that gathers their EEG readings (i.e., brainwaves). By linking these readings directly to eye-tracking data, we are able to know exactly what a person was viewing when we measured their neurological responses. The practice eliminates reliance on shoppers’ claimed feelings or behaviors, which can be difficult to accurately gauge or express-people often don’t know exactly how and why they made certain decisions.

What's the biggest challenge holding design back as a key business strategy? Is “design thinking” a term we should use to explain the power of design to the C-suite?

How to Trigger Emotional Engagement with Your Product Packaging