The ROI of a package redesign

Order Reprints
No Comments
An up-and-coming gourmet pizza brand sees a nice return on a package redesign that boldly celebrates its gluten-free status. 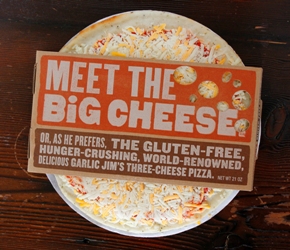 Garlic Jim's pizza is seeing a nice return on its package redesign investment
A gourmet pizza chain out of Washington, Garlic Jim’s wanted to expand on the success of its gluten-free pizza with a frozen version sold in grocery stores.
As one of the first gluten-free pizzas in mainstream retail, the brand had a unique niche. But it realized better packaging was needed to help shift consumer perceptions about gluten-free products (as lacking in taste).

Instead of doing the typical “beauty” shots that shoppers are used to seeing in the frozen pizza aisle, the redesign took a typographic approach that celebrated the product’s gluten-free status and promoted it as tasty, and even fun. Quirky slogans and tongue-in-cheek messaging are meant to initiate a conversation with potential customers, encouraging them to embrace gluten-free foods as a healthier choice versus being apologetic for buying them.
THE BOTTOM LINE: Introduced less than a year after the frozen pizza’s retail debut, the new packaging has influenced an incremental sales lift of 25% to 30%, beyond the new products’ natural growth curve.
Retailers are now giving the brand more promotional support, featuring it in large end caps, and the brand is also better connecting with a broad base of consumers (not just gluten-intolerant people). Some mainstream retailers are reporting Garlic Jim’s pizzas as some of the top-selling items in their frozen-food sections, while other health food stores are listing the line among the top-selling items in their stores overall.
The new packaging has produced “an air of excitement about the product” and “extremely positive feedback from all levels of retail sales,” says Garlic Jim’s CMO Max Clough.
Distribution is currently localized in Western Washington, but the brand is anticipating a larger regional rollout, with hopes of national expansion.
Package Design: Hornall Anderson

A Taste of the Iconic Cadbury’s Redesign

Managing Risk in a Package Redesign: What Can We Learn From Tropicana?