AGI and Shorewood Packaging celebrated the branding of their new logo and company, ASG. 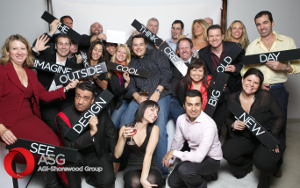 The launch event celebrated the new name of the company and showcased the new logo and branding. The event was held in a gallery in the Mid-City area of Los Angeles (near the old AGI office). Custom viewfinders with images of the ASG locations, ASG totes and pamphlets were given to all in attendance. A photo booth was set up with cubes and Velcro word props, as guests enjoyed instant photo print outs to take with them as keepsakes. The pamphlet, viewfinder reels, posters, plastic logo spheres and corrugate cubes; were all produced by the LA design and structural teams. Samples of recent packaging from a variety of industries were also on display.

Global Design: Who's leading the way?