What Pablo Picasso and Steve Jobs may have been hinting at with their adage. 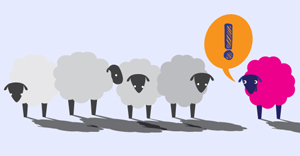 Ever heard the quote, “Good artists borrow, great artists steal?” Apparently, Picasso might have said this back in the day, but the true source is lost somewhere in history. Regardless, I’m more concerned with why this adage was ever uttered in the first place. After all, Picasso was the kind of artist who was truly innovative in every way and helped to create multiple art movements. So, why would he endorse an ideology that fosters the notion of stealing other people’s work? Maybe the answer can be found in one of our modern day heroes, Steve Jobs. When asked about Apple stealing technology from companies such as Xerox for his Macintosh computer, he referenced Picasso. Maybe he meant that great advances come from a community of innovators sharing ideas to help all of us move toward a better tomorrow? Or maybe there was something more sophisticated going on: Maybe he was not talking about stealing at all but how not to follow herds.

One of the surest of tests is the way in which a poet borrows. Immature poets imitate; mature poets steal; bad poets deface what they take, and good poets make it into something better, or at least something different. The good poet welds his theft into a whole of feeling which is unique, utterly different from that from which it was torn; the bad poet throws it into something which has no cohesion.

Consumer tech is filled with what I call “me too” products and retail presentations that imitate each other. For example, a few years ago, based on the success of companies like Belkin and Monster Cable, the computer and AV cable markets exploded. Companies that had no expertise in the field were coming out with products and copying the latest packaging styles in the attempt to grab a piece of the pie. More recently, based on the success of the Beats by Dre headphones, every outfit — from technology, to clothing companies, to the odd licensing deals such as the Peanuts characters — is now hocking its own line of headphones. How does Charlie Brown equate to better sonic quality at a premium price point? Your guess is as good as mine.

These markets get oversaturated so quickly that one might think it’s impossible to elbow in successfully. The good news: Most “me too” players also copy the branding efforts of the market leader. This leaves massive amounts of opportunity if you know where to look. Pick virtually any aisle in any electronics department or big box store and see for yourself. For those of you reading this from your couch or cubicle with no plans to hit Best Buy today, here are a few examples to illustrate my point.

The router aisle in Best Buy is nearly all black packages that share very similar structures. Almost all use the same three-quarter angle shot of their black router boxes, accented with different colors for brand differentiation. No brand is talking about why I need one over another, and they all look exactly the same. It’s all tech specs, features and benefits of products that do nothing more than talk about themselves. Until, of course, the rebrand for Linksys appeared. The new design is original to the space and very well executed (and oh, did I mention, Belkin just purchased them?). Well done (insert creative agency here), you just made your client a gazillion dollars and successfully proved that not only is originality important but also massively more profitable.

So, you’re still not convinced? Well, let’s head over to the headphone aisle where this whole rant began. Again, it’s a wall filled with mostly black boxes using similar structures. Either you have black boxes that use images to show the product on the front, or you have a side window box that shows half of the headsets. Structures aside, it’s the prolific use of black that’s more troubling. Black products on black backgrounds probably looked great on a computer screen from two feet away, but they become a sea of black when printed on boxes and seen from 10 feet. It’s not just color but also how the products are positioned that showcases the herd mentality.

And we know who is responsible for this: Beats by Dre. Beats looked at a herd that had been coasting for decades on the position of sound performance and found a new door into the market. That ignored opening was the lifestyle and fashion door. Beats firmly kicked it in, opening it up for a flood of “me toos” to follow. Now we have Skullcandy selling headphones to the extreme sports crowd, Yurbuds selling to the workout crowd and even Bob Marley marketing headphones to the reggae crowd. The whole market has changed from huge generalists like Sony and Philips to specialists making products for specific groups. Therein lies the opportunity … for now, at least.

Where does it all end? You want to hear rock bottom? A few years ago, we actually had a company approach us and say these words: “Can you make us look 80 percent Apple and 20 percent us?” The answer was no then and still is now.

The reason why Apple and Beats have the amazing brand recognition they enjoy today is because they created their images against the grain of the time. What made sense to them was to build brands that were authentic and true, while the herd was moving in a different direction. In the case of Beats, there was no status quo for the demographic it zeroed in on, so it had to start from scratch. Apple’s design aesthetic came straight from Steve Jobs and Jonathan Ive without the slightest care for what everyone else was doing. The authenticity comes through in both retail presentations respectively, and the public has responded. Now, I’m not suggesting to ignore what the competition is doing. I believe it’s very important to know exactly what everyone else is up to. However, when it comes to executing on the “rubber meets the road” tactical outputs such as product packaging and point of purchase displays, make sure you always ask yourself one question: Do I want to be with the herd, or do I want to be heard?

Jamie Capozzi, founder and president of Theory Associates (www.theoryassociates.com), is a branding expert specializing in the consumer tech industry. He and his team of creative professionals help companies create, rejuvenate and maintain their brands.