This is not your mother’s “homemade”

Americans have redefined how we shop, cook and eat. 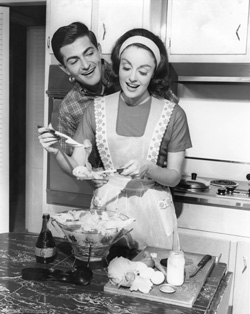 In less time than it takes to download a movie or to get the charcoal lit, home cooks all over America are throwing together meals that are quick, satisfying and and nutritious for loved ones inevitably on the run.

And as busy as today’s singles and families are, they are cooking – just not like their grandmothers did. With most adults working and entire families feeling overscheduled, modern cooks are far more likely to simply and creatively combine pre-packaged and fresh foods in a growing trend that has wide-ranging implications for food manufacturers and retailers.

Television chef and author Sandra Lee has built an entire empire around the “semi-homemade” cooking concept, pairing simmer sauces and soups with pre-cut, pre-washed veggies and pre-skinned, boned and portioned meats and fish. Her hit television show “Semi-Homemade Cooking with Sandra Lee,” which has been part of the schedule on the Food Network for 15 years running, both anticipated this trend – and helped fuel it.

Smart food manufacturers are innovating furiously to keep up with these adventurous but impatient eaters, releasing an onslaught of products in a semi-homemade style. For example, Indian, Thai and Mexican simmer sauces have joined the old stalwart spaghetti sauce – and even those tomato-based Italian sauces are getting a fresh makeover. Frozen piecrusts, long a Thanksgiving timesaver, now have some company, with a variety of fresh store-made pizza doughs, pre-made taco tortilla bowls and phyllo tart shells to give home bakers a head start. Beans are one of the ingredients even celebrity chefs use pre-cooked from the pantry – and never have there been so many varieties available. Staples such as black, pintos and garbanzos have been joined by exotic varieties such as cannellini, flageolets and cranberry beans, just to name a few.

The semi-homemade trend is also evident in the produce aisle, where Boomers and likely many Millennials remember a time before pre-washed, precut bagged salads were the norm and grocery stores stocked pre-skinned, seeded and chunked up vegetables of every ilk. Today, convenience fruits and veggies are a $12-billion industry and the fastest-growing trend in produce – and one that shows no signs of abating, says Fruit Grower’s News.

And truth be told, it is the Boomers and Millennials who are the biggest proponents of this new food trend. Among the time-stressed families across America cooking in a semi-homemade style, the Baby Boomers, now 47-to-66 years old, and the Millennials, who are 18-to-32, are the two largest demographics.

But Boomers, who still control the marketplace, will soon be passing the torch of consumer dominance to Millennials, who have redefined cooking to fit their lifestyles. Born between 1982 and 2001, the Millennial generation (AKA Gen-Y) is projected to be more influential than any before it. Millennials are also on their way to becoming the most food-knowledgeable generation in history, according to trend-watcher CEB Iconoculture, with more than 40 percent describing themselves as “foodies.” They are adventurous about trying unfamiliar ingredients and open to exotic flavors and spices. We would expect nothing less given that they are the most multicultural generation yet and spend their time traveling the World Wide Web, as well as the world.

So what can food manufacturers do to appeal to these globetrotting, label browsing, clock-watching cooks?

When in doubt, simplify the cooking process – Innovations like vented microwave steam pouches have made it easier than ever to cook vegetables, for example. And when it comes to beef, chicken or fish, chores like boning, skinning and de-veining have never been more optional. These on-trend, cleverly packaged culinary products target Millennials’ desires to incorporate healthy ingredients into their homemade fare, while also remaining true to the fact that they are always on-the-go and do not have time to be in the kitchen all day.

Taste and nutrition are both important – This generation wants nutritional peace of mind to go along with their fast suppers and they’re paying attention to nutritional labels. Millennials gravitate towards cartons over heavier jars or cans, which can impart a metallic taste to foods, market researchers tell us. Many brands, such as Pacific Natural Foods, Whole Foods (which recently won “Retail Innovator of the Year”), and Trader Joes (“Where Millennials Go To Shop”), are also turning to Tetra Pak’s (www.tetrapack.com) Tetra Recart carton, an eco-friendly alternative  for healthy foods such as tomatoes, vegetables, beans and chunky soups.

Grab them in the aisles – Packaging both presents and preserves these sophisticated products, beginning in the grocery aisles, where consumers want eye-grabbing packaging that quickly conveys its contents. Retailers get a double benefit from rectangular packaging like the Tetra Recart, because it allows them to conserve valuable shelf space when compared with rounded packages and its 100-percent printable surface always faces the shopper on the shelf, providing a mini-billboard for eye-grabbing graphics that appeal to target consumers.

This generation is really cooking. They are in the stores, shopping and looking for pre-packaged culinary products that are creatively formulated, smartly packaged and modern. As Millennials and Baby Boomers continue to boost sales in these growing categories, savvy manufacturers will be there to meet them in the aisles.