This website requires certain cookies to work and uses other cookies to help you have the best experience. By visiting this website, certain cookies have already been set, which you may delete and block. By closing this message or continuing to use our site, you agree to the use of cookies. Visit our updated privacy and cookie policy to learn more.
Home » Bottled water containers make up just 3.3% of all beverage containers in landfills
Packaging NewsCans & bottlesSustainable Packaging

Bottled water containers make up just 3.3% of all beverage containers in landfills

“First, we examined the “tons” of mismanaged packaging—i.e., the containers that go into landfills instead of being recycled,” says Mr. Hogan. “Its important to note here that nearly all beverage containers are 100 percent recyclable and should be recycled, not placed in landfills.”

According to the most current data from the Container Recycling Institute’s (CRI) signature analysis of beverage container sales and recycling rates, Bottled Up (2000-2010): Beverage Container Recycling Stagnates, 9.315 million tons of beverage container packaging was “wasted”—i.e., ended up in landfills—in 2010. But within that number, PET containers for bottled water, with an average weight of 9.89 grams, make up only 0.308 million tons. PET for carbonated drinks packaging weigh considerably more (23.9 grams) due to the need to use heavier plastic for carbonation—and thus totaled 1.239 million tons. (In October 2015, Beverage Marketing Corporation published data showing that from 2000-2014 the average weight of a 16.9 ounce single-serve PET plastic water bottle declined 51 percent to 9.25 grams.

“Again, we researched the facts to compare bottled water’s PET containers against the previously identified seven most common drink packages. The quest was to determine the environmental impacts of each packaging type.”

“Using the CRI report, we discovered that PET plastic for bottled water containers has the smallest footprint when you consider energy used to make the container, greenhouse gas emissions, and recyclability rate. While foil pouches and aseptic boxes use slightly less energy to make, both of those packaging types are not easy to recycle—and in some locations they are impossible to recycle, sending nearly all of these post-consumer drink packages to the landfill. Thus, we made a very slight “environmentally unfriendly” adjustment for foil pouches and aseptic boxes.”

Mr. Hogan said articles misrepresenting bottled water’s impact on the environment were too numerous to count and often fueled by campaigns of misinformation organized by anti-corporation adversaries.

“We’re hoping this new infographic will help get the fact out to consumers up so that they can make smart choices about packaged beverages,” he says.
“We hope that people will help us spread the truth about bottled water’s recyclability and environmental impact.” 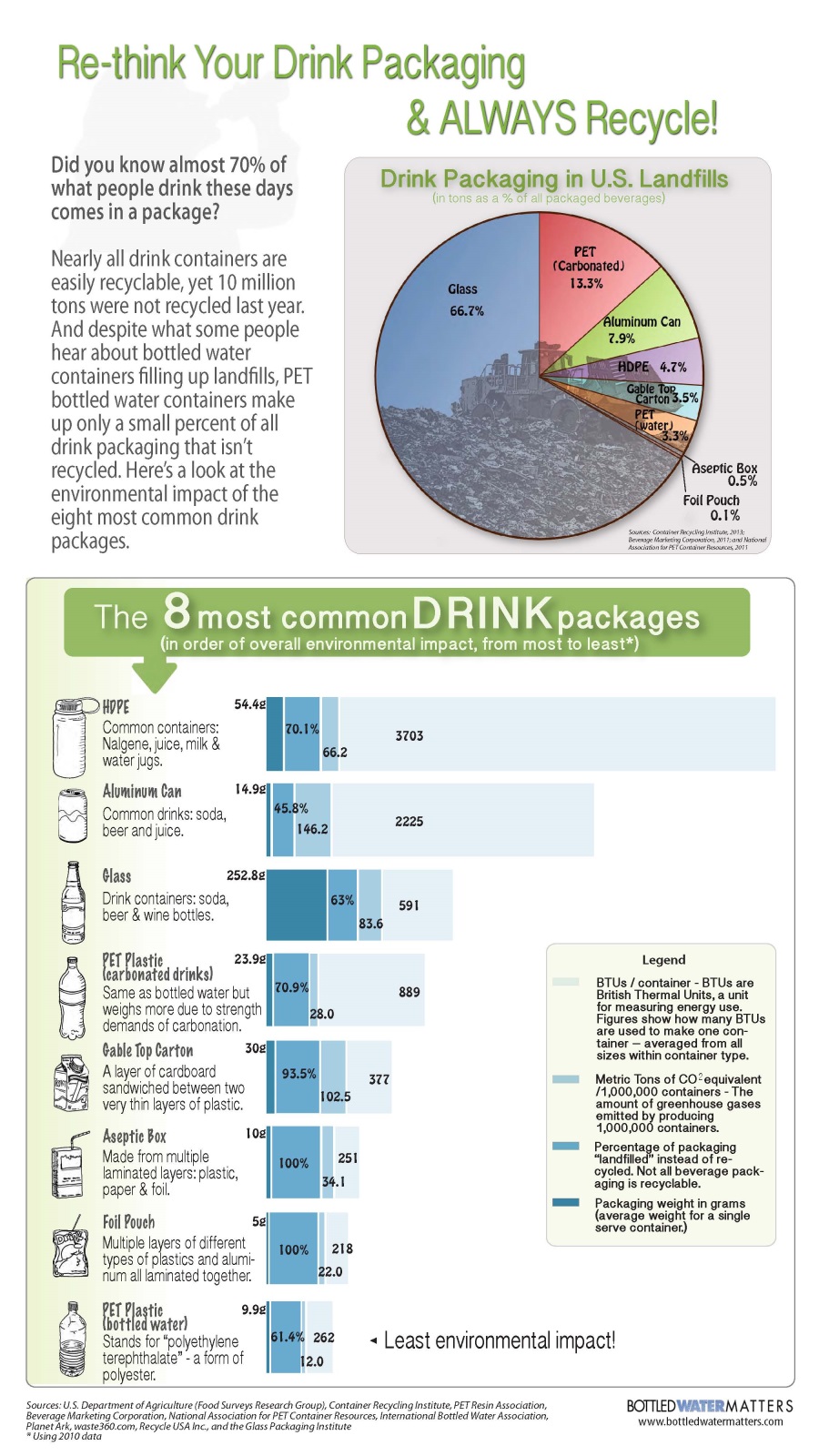