Order Reprints
No Comments
Six packaging trends to appear in the new year.


A lot has changed over the past two years. In the economy’s downfall, a competitive uptick was created, strengthening innovation in package design and structure. Consumers began spending their money in a whole new way, which required brand marketers to pull out all the stops in order to reach them.

But what can we expect in a post-recession new year? Put away your crystal ball. Mintel has identified six packaging trends for 2010.

Forty-eight percent of Americans say they would reduce their caloric intake if the calorie information were printed on the front of the package, according to Mintel research. Consumers are looking for clear, concise nutrition information, and currently, they’re not getting it.

“As a rule, they are looking for hard data from reliable (impartial) sources to help them make decisions,” says Lynn Dornblaser, director of CPG Trend Insight for Mintel International. “That means that certification symbols (e.g. USDA certified organic, AHA heart-check symbol) are a bit [more convincing than] symbols such as the Sensible Solutions symbol from a group of CPG companies.”

The best way to display hard data is to take from the nutrition panel, Dornblaser says.

Take Coca-Cola’s new 90-calorie mini can, rolling out nationwide by April 2010. The 7.5oz can was developed as a portion control option for consumers. Fitting with its purpose, the packaging’s 90-calorie call-out bubble is the most noticeable part of the design. In fact, Coca-Cola plans to display the calorie information on the front of all its U.S. beverage products in the next year.

A trend toward boutique-inspired packaging will elevate ordinary products like soap and juice to a whole new level in 2010, Mintel says. These simple, convenient products will retain their function, and perhaps their price, while obtaining a premium positioning.

After a redesign in August 2009, the Yardley brand does just that. The 240-year-old brand turned to Little Big Brands for a package design that would reflect the products’ healthy ingredients and affordable, but premium, positioning. The 100 percent biodegradable and recyclable packaging features detailed botanical illustrations with contemporary typography to convey an authentic, fresh design.

It’s not always easy for shoppers to find the brand or variety they’re looking for in the grocery store. In fact, Mintel found that 64 percent of Americans say they want color-coded packaging, which would ease brand and variety differentiation. Well, ask and ye shall receive.

In 2010, to help shoppers find the products they’re looking for faster and easier, more manufacturers will be color-coding their packaging, according to Mintel. Plus, shelf standout is an added bonus.

A great example is Vitaminwater. Each flavor is represented by a color on the label, which mimics the color of the liquid inside. This way, consumers can search for their flavor by color, packaging and name.

The trend toward natural food, beverages and personal care products continued to grow throughout 2009. And it’s not slowing down for 2010.

Instead, we’ll see a growth in lighter, slimmer, “fitter” products, which in some cases means less packaging.

“It goes along with the entire story a product tells – fewer ingredients, easier to use, less packaging,” Dornblaser explains. “All parts work together to convey the benefits to consumers.”

Pepsi Natural, for instance, featured natural sugar instead of high-fructose corn syrup for a simpler ingredient statement when it launched last year (it has since been discontinued). To convey its natural message, the packaging featured a transparent applied ceramic label and used glass bottles versus plastic. 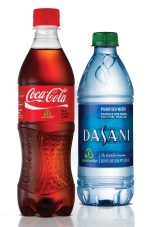 In November 2009, Coca-Cola announced the introduction of its first 100 percent recyclable PlantBottle made partially from plants. The bottle recycles just like PET bottles (which differentiates it from other plant-based plastics), but it reduces the company’s dependence on petroleum and its carbon footprint.

Mintel found that 55 percent of Americans say they would prefer to buy biodegradable plastic containers versus regular PET bottles. And 2010 may be the year they’ll be able to do it.

“If Coke is able to make this work, we’ll see the PlantBottle concept appear first in PET beverage bottles from Coke and from other major beverage companies,” Dornblaser says. Then niche companies may begin to break through with the technology. Regardless, Dornblaser suggests that success or failure of the PlantBottle in 2010 will likely determine the material’s fate in the CPG industry.

If there’s one thing we’ve learned in 2009, it’s that consumers are looking for two things: convenience and value. And when it comes to helping save the environment, consumers want to help. But they don’t want to pay for it.

According to Mintel, the number of UK consumers willing to make lifestyle compromises for the sake of the environment dropped four percent from 2008 to 2009. However, nearly one in five people said it’s worth doing if it saves them money. Thus, in 2010 the key for manufacturers and retailers will be offering eco-friendly products at a fair price.

“The degree to which companies are able to do that will dictate how much [sustainable packaging] we will see on the market,” Dornblaser says. “This is different from companies that already have a very strong business focus on the environment and make products that appeal to the dedicated eco-friendly consumer. Those products will continue in the market, as those consumers will make the sacrifices necessary to buy those products. But they are a minority.”

In the meantime, companies should continue making small moves toward becoming more eco-friendly, so that consumers will be more likely to accept them.

For instance, at the beginning of 2009, Kellogg Co. test-launched Kellogg’s cereals in space-saving boxes, containing the same amount of product, but using less packaging material.

Going into 2010, it is clear that the recession has redefined the meaning of money, causing consumers to make purchases in a whole new way. Post-recession, they’ll be taking those lessons with them in their search for simple, upscale and eco-friendly packages.

But just like pre-recession times, their first interaction with a product is through the packaging. So get ahead of the game. Look ahead to 2010, and give consumers a reason to buy again.

Where to go for more information…
Mintel International
312.932.0400
www.mintel.com

How to Package Online, Lifestyle Phenomena into a Brand Poised for Success on Shelf