For The Coca-Cola Co., marking its 125th anniversary is less about looking back at the Coca-Cola brand’s storied history and more of an opportunity to highlight the company’s future.

“We are just getting started,” says Muhtar Kent, the company’s chairman of the board and chief executive officer. “We remain today as energized and as excited as Dr. John Pemberton was, I am sure, back on May 8, 1886, when he poured his first Coca-Cola. The fact that we are a thriving business, a growing business and a dynamic business 125 years later is not a testament, for sure, to our age, but to our youth.” 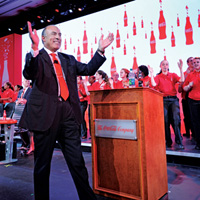 Coca-Cola CEO Muhtar Kent marked  the Coca-Cola brand's 125th anniversary during the annual shareowners meeting in April. The meeting featured a chorus of 125 students from metro Atlanta and New York. Credit: Michael Pugh.
Marking that milestone, Coca-Cola remains laser focused on the growth prospects Kent set forth in his 2020 Vision, a roadmap for “winning,” in partnership with the company’s bottling partners. To develop that vision, Kent first organized Coca-Cola’s leadership and bottling partners to identify a framework for what he saw as a dramatically changing global landscape.

“The world that we were inheriting at the end of 2007 was shaping up to be one that would be significantly different than even a year or a couple of years before that,” says Kent. “The change was very rapid.”

The leadership team identified key global trends that, they believed, would fundamentally change the company’s business - and the world - by 2020. Chief among them is the emergence of a larger, global middle class; Coca-Cola predicts 800 million to one billion new people will join the middle class ranks by 2020.

The rest of the trends trickle down from there. Coca-Cola predicts a massive relocation to urban environments around the world; over the next several years, an urban population equivalent to the size of New York City will be created about every 90 to 100 days, says Kent. The middle class boom will also result in a rebalance of economic wealth, shifting the economic landscape from one or two superpowers to several: the BRIC countries, but also Indonesia, Turkey, Morocco, Vietnam, Chile and Mexico. The growing global population will naturally put more strain on the world’s supply of commodities and energy, creating a scarcity of natural resources. And with population growth on both sides of the spectrum - an increase in people ages 40 and older and the rise of a sophisticated, engaged youth generation - Coca-Cola is watching demographic shifts. The consumer landscape is also marked by a fundamental reset of priorities, values and expectations, and consumers are demanding more from companies and sharing their priorities for products, packages and pricing.

The trends indicate a future marked by great change, but Kent says they also present increased possibilities. “We see a world with more people, more wealth, more demand for choice, living on-the-go and highly mobile lifestyles that [have] contributed to a higher demand for ready-to-drink, non-alcohol beverages,” he says.

The company believes that global market demand can grow its business from its current $650 billion marker to $1 trillion in the next decade. Translated into daily servings, that means doubling from the current level of 1.7 billion servings of Coca-Cola products worldwide every day to 3 billion daily servings by 2020.

Of course the global megatrends are just a framework. To put the strategy in place, Kent organized corporate goals around simple ideas: profit, people, portfolio, partners, planet and productivity. As he broadly explains, the vision is to “more than double our system revenue, [win] with the greatest talent pool in the world, certainly [leverage] the power of trademark Coca-Cola and our sparkling beverages, [create] the most valuable portfolio and [ensure] that we have greater leadership position than we have today in the sustainability spectrum by embedding that into our business planning process.”

At the heart of the plan is the idea of building on the power of the company flagship - trademark Coca-Cola - to bring people together around the world. “Coca-Cola is more than just a drink: it’s an idea, it’s a vision, it’s a feeling and a great connection,” says Kent. “It’s one of the truly common threads that actually bond the world together, tie the world together.” 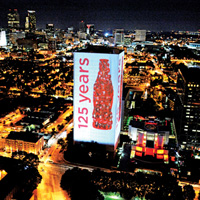 Coca-Cola headquarters is illuminated against the Atlanta skyline in celebration of the company's 125th anniversary in May. The display was the world's largest single-building illumination, covering more than 210,000 sq. ft. Visual design/projection: Obscura Digital. Photo credit: Michael Pugh.
The Coca-Cola brand also has a role in helping the company build its broader portfolio. Coca-Cola’s business was based on one product in one package until 1955, when it launched a king-sized package. Soon after it began expanding into new beverage offerings.Today, its portfolio includes 3,500 beverages throughout the world.

“One of the true strategic advantages of a truly global system, such as this one, is transfer of knowledge,” says John Farrell, the company’s vice president and chief strategy officer. “So as you’re having a great product or a good consumer proposition, the faster you can transfer it to other countries around the world, the greater your opportunities are.”

A recent example is the international success of Minute Maid Pulpy, a juice drink that features added fruit pulp. The beverage launched in 2005 in China, where the local preference is for pulp. The brand is now available on three continents in 18 geographies and has been designed to appeal to local taste profiles in each market. In 2010, the pulp-enriched juice product was introduced in Algeria, Malaysia, Singapore and Vietnam, and in Kazakhstan as Piko Pulpy and Mexico as Valle Pulpy. The global expansion resulted in Pulpy joining Coca-Cola’s roster of billion dollar brands.

“First and foremost, in everything we do, is making sure that we excel in sensory delight,” Wollaert says. “Taste is king and, of course, taste is a captive word for aroma and other aspects of sensory platform.” Innovation also centers on worldwide trends toward natural products as well as wellness and nutrition. Wollaert says the company is on pace to transform products to remove artificial ingredients and preservatives.

And, of course, it’s all impacted by sustainability, in which goals range from packaging innovations to plant efficiencies, Wollaert says.

The company also looks to innovate around its methods of connecting with consumers, Wollaert says. The company is considering how to best leverage global trends of connectivity, mobility and social media - a large focus for the company’s marketing team, he says.

As The Coca-Cola Co. considers all these trends and strategies and continues momentum toward its 2020 Vision, Muhtar Kent keeps the lessons the company has learned in its 125 years in business top of mind.

“Arrogance is what almost brought us down in the 1990s - being away from markets, not touching the consumer, not understanding the consumer,” he says. “That’s what keeps me awake, because you can easily get mesmerized by the portfolio of wonderful brands that we have. Today, the consumer needs to be understood even better than any time before. We have to earn the trust of our consumers every single day.”

Kent insists that achieving the goals set forth is not going to be easy, “It is not for the people who have a faint heart,” he says, “But is it achievable? The answer is absolutely yes.”

Coca-Cola Targets Younger U.S. Voters with Get Out the Vote Campaign

Coca-Cola Brings New 220ml Sleek and Slim Can to Brazil