Order Reprints
No Comments
To celebrate Coca-Cola’s 125th anniversary this summer, markets around the world are launching commemorative bottle and can designs. Here, a few of our favorites. 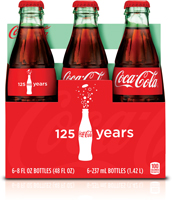 Designed to evoke a sense of nostalgia, the United States released an 8oz contour-shaped glass bottle. The limited-edition design, sold in six packs, features “125 years” label panels with bubbles bursting from the bottle. In May, the brand also introduced a 1.25L bottle that is rendered in the brand’s classic contour shape; print and radio ads will be used to draw the connection between 1.25 liters and 125 years.

Across the pond, Coca-Cola fans will find a set of four original glass bottle designs packaged in a wooden crate. The reproductions include a replica of the earliest Coca-Cola bottle, the Hutchinson, which dates back to 1899 and features the iconic “Coca-Cola” script; the crown-capped, straight-sided bottle, complete with diamond-shaped paper labels, created in 1907; the brand’s Prototype bottle patented in 1915 (the result of a challenge to bottlers to create a structure that could be recognized by feel in the dark or identified lying broken on the ground); and the famous contour bottle created in 1916. The set is available exclusively at Selfridges.

Coca-Cola Brings New 220ml Sleek and Slim Can to Brazil