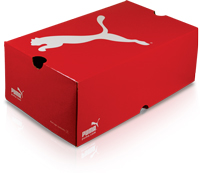 BEFORE
The story: In 1924, brothers Adolf and Rudolf Dassler started a small shoemaking company in Bavaria, Germany. However, after an intense feud, the brothers parted ways and formed two rival, iconic businesses-Adidas and PUMA Schuhfabrik Rudolf Dassler.

Since its 1948 launch, PUMA has developed innovative products and used creative marketing techniques to become an industry leader-a role that also has PUMA reinventing the way the industry approaches sustainability.

“For a long time our mission has been to become the most desirable sportlifestyle company,” says Jochen Zeitz, the company’s former chairman and CEO, who was promoted last month to oversee the sports lifestyle division of the brand’s owner, French retail group PPR SA. “We have evolved [that] mission to be the most desirable and sustainable sportlifestyle company in the world.”

The challenge: Knowing that shoe boxes contribute millions of tons of waste each year, an essential step in PUMA’s long-term sustainability program was to create a packaging system that would reduce the brand’s footprint, from its energy and water use to its waste and CO2 emissions.

To do so, PUMA turned to Yves Béhar and his team at fuseproject. “My thoughts were immediately about reinventing the way shoes are shipped and how they are experienced by the consumers,” says Béhar, fuseproject founder. “[But] the logistics and material research was really challenging.”

The solution: Béhar and his team spent 21 months conducting extensive research and development. “It was a very wide, big effort-we had to understand the entire logistics, manufacturing, shipping and retail cycle to be able to innovate within those constraints,” he says. “We visited numerous factories where we discussed process costs for the [shoe] box-making efforts; we visited distribution centers in the US and Germany to understand the complexity of retail; and we spent time in stock rooms to observe how retail staffs deal with inventory.”

After nearly 40 prototypes and 2,000 sketches, Béhar developed the “clever little bag.” The unique packaging system eliminates the shoebox entirely. Instead, it consists of a die-cut sheet of ink-free, thin-gauge recycled paperboard that tapers to form four walls, which are then held in place by a 20 percent, non-woven polypropylene bag. “I believe that it is possible to reduce materials and energy use and deliver a better and long lasting experience,” Béhar says.

By replacing the shoe box with a recyclable, reusable bag, the “clever little bag” ends up using 65 percent less paper than the standard design, which results in a 60 percent reduction in water, energy and diesel consumption on the manufacturing side. To be more specific, the design saves 8,500 tons of paper, one million liters of water, one million liters of fuel, 20 million mega joules of electricity and 275 tons of plastic.
The results: By evolving the packaging and distribution life cycle, PUMA and fuseproject are reinventing how designers, suppliers and manufacturers think about packaging. “The PUMA ‘clever little bag’ is changing the perception that packaging cannot evolve,” Béhar says. Up next, Puma plans to roll out its clever little shopper (a carrier bag that is made from 100 percent cornstarch) and smaller hangtags and apparel bags.
WHERE TO GO FOR MORE INFORMATION…

Why Less is More

COMBOS Mixes It Up

Why Less is More