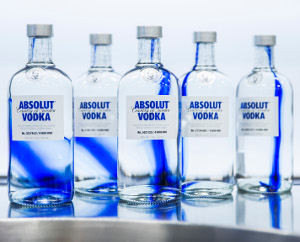 Turning an idea into world-leading packaging is a challenge that the development team at Ardagh’s glass production plant at Limmared in Sweden is willing to take on. The company that produced the award-winning Absolut Unique bottle has reportedly pushed the frontiers of glass packaging even further with the launch of Absolut Originality.

Using partial coloring for what the company believes to be the first time on a commercial l scale in the glass container industry, Ardagh has helped Absolut enchant its customers with another limited collection of four million individually designed bottles. Each one represents a unique work of art, achieved with a "drop" of cobalt blue infused into the molten glass at the "hot-end" of the production process in Limmared.

“We are proud to have partnered with Absolut in this innovative development for their 2013 end of year campaign,” remarks Johan Gorter, CEO, Glass Europe at Ardagh. “The concept takes unique bottle design to the next level, where the decoration is achieved within the glass container, rather than being added to the outer surface of the bottle after production.”

To succeed in this project required a combination of skills from Ardagh and its partners, which, in common with the Absolut Unique project, aimed to take high-volume glass container production to new levels of ingenuity and distinction.

Using a cobalt color compound (frit) supplied by Ferro and specialized hot-end equipment from Füller Glastechnologie, Ardagh’s workforce was able to perfect the coloring process and then produce the four million bottles during a three week period.

“The results are fantastic,” comments Mathias Westphal, global brand director at Absolut. “We took inspiration from traditional Swedish glass craft and made it available to the world. When we watched a drop of cobalt sink into the hot glass for the first time we didn’t know what it would look like. But the very first bottle looked amazing, and what started as a playful experiment ended up as four million one-of-a-kind works of art.

“The streak of cobalt forms a sophisticated contrast to the crystal clear glass, and the blue makes each bottle unmistakably Absolut.”