Instant Knockout Punch is for men looking to burn fat. 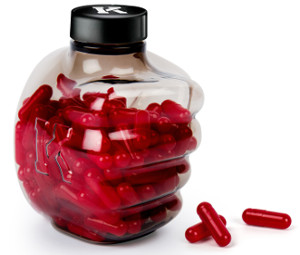 When a new product enters an already crowded field –– like the weight-loss supplements marketplace –– standing out from that crowd is critical to success. Robert Parker, owner of Roar Ambition., recognized that when he developed his new weight-loss product targeted towards men. Roar Ambition already had an existing product in the male supplement market, and Parker knew that there was a demand in the market for a unique fat burner, but he also knew it would have to grab attention.

To create that impact, Parker conceived of a dramatic package –– a clear plastic bottle molded in the shape of a clenched fist. That would show off the bright red capsules while projecting his “knockout fat” theme. It was intended to be eye-catching and designed specifically to appeal to his target demographic: younger men who are already working out but who want help losing that last few pounds of fat.

“My goal for Instant Knockout,” says Parker “was to make it the number one fat-burning supplement on the market for these men. We had spent many months creating, researching and testing a very effective formula, and I wanted branding and packaging that delivered the same impact as the formula.”

TricorBraun helped Parker turn this unique design concept into a finished bottle that would retain its dramatic shape when molded in clear plastic.

“The TricorBraun designers and I spent a lot of time talking about what was possible,” Parker says, “and they would then consult with the bottle blower. I was very keen to get the bottle perfect, even if it would delay the project. We were pushing the limits of design and blow molding capability.”

“It’s still early days,” says Parker, “but so far the product is selling very well and we are getting great feedback from the customers about it. They love the eye-catching bottle and powerful formula!”