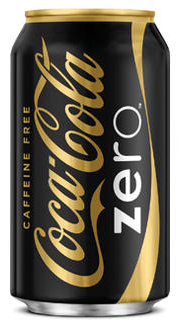 This summer, when Coke Zero fans want to pop the top on their favorite beverage, they no longer need to consult the hands of the clock. The brand is now being made available in an option without caffeine.

The launch of Caffeine Free Coke Zero is part of a broader strategy designed to make the fast-growing brand even more ubiquitous and available to consumers at any time throughout the day. Coke Zero has become increasingly visible in recent years through a variety of high-profile marketing initiatives, including:

Caffeine Free Coke Zero will begin appearing on shelves in supermarkets, drug stores and mass merchants nationwide in mid-July, and will be available coast to coast in August. It will be packaged in 12-packs of 12-ounce cans and 2-liter bottles. In addition, the Coca-Cola will offer opportunities for people to sample the beverage.