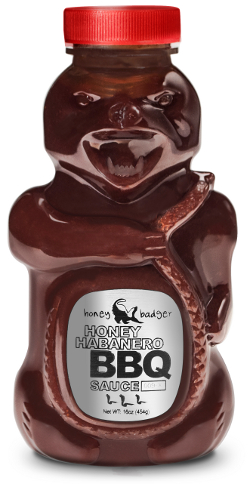 In 2012, three California engineers dissatisfied with the barbecue sauce choices on local store shelves created their own super-spicy honey-and-habanero version. They dubbed their invention Honey Badger BBQ Sauce – inspired by a popular YouTube parody of a National Geographic program on the African honey badger – and decided to bring the product to market in a 3D package shaped like its rough-and-tough animal namesake.

With nearly $50,000 raised on crowdfunding website Kickstarter and design/production assistance from Berlin Packaging’s Studio One Eleven, the unlikely food entrepreneurs went to work to translate their concept into reality. The process required multiple adjustments to the sauce company’s preliminary 3D sketches in collaboration with the mold maker, blow molder and filler to ensure manufacturability and fillability. The final blown PET bottle design features a snarling honey badger locked in combat with a cobra, complete with claws, fangs and ferocity that practically jump out of the resin.

The 16 oz bottle was produced in two versions for two different sauce formulations: a $6.99 ‘Cobra Strength’ version with a pressure sensitive label and a stock black heat induction line cap, and a $60 palate-on-fire ‘Triple Cobra Strength’ limited edition with an embossed, numbered metal badge and the same closure in red. The limited edition sold out almost immediately to Kickstarter funders and on www.honeybadgersauce.com. The milder edition has also sold briskly online, earned placements in several San Francisco-area stores, and is now on its way to broader distribution. The package, says co-creator Paul Lees, is the “centerpiece of the whole brand.”

From Paper to Production

The road to building the brand began with a series of 3D sketches created by a designer in England with whom the three Honey Badger Products partners had worked previously. Those initial drawings established the distinctive structure of the package, from the badger-versus-cobra image to the sharp teeth and other fine details that bring the badger’s savage persona to life, but they presented multiple mold, production, filling and labeling challenges.

The length of the snout and the heavy detail on the badger’s face, for example, would have caused uneven plastic distribution during blow-molding as well as filling complications because the bottle opening would not be centered for the fill heads. The irregular shape lacked a neck or other spot that could be gripped by the filler’s scrambler machine to properly orient the molded bottles for filling. The protruding belly, back and nose yielded positioning difficulties on the conveyor, and the location of both the snake and the badger’s claws left insufficient label space.

Working with Creative Blow Mold Tooling (Lee’s Summit, MO), Parker Plastics (Sand Springs, OK), and Arcobasso Foods (Hazelwood, MO), consultants at Berlin Packaging suggested modifications ranging from shrinking the size of the snout to reducing the circumference of the body to allow the bottle to hit the guide rails on the filling line at the appropriate points. Other recommendations included adding contact points on the badger’s shoulders and legs to aid alignment on the fill line, moving the snake and claws on the front of the bottle to create a label panel, and adjusting critical features like the fangs to ensure that there would be adequate definition when the bottle rolled off the production line. “We didn’t want the bottle to look like a honey bear,” says Berlin Packaging’s Cathy Murphy.)

The Honey Badger team took the changes back to their designer for the final 3D work, the finished product hit the company website in January 2013 with media coverage in outlets from the San Jose Mercury News to Huffington Post, and several months later the package won a 2013 NACD Packaging award. Lees and his partners are convinced that their sauce’s unique mix of heat and sweet will win consumers over once they taste it, but they know that the package is fundamental to driving the initial sale.

“Barbecue sauce is the most competitive condiment in the market. On the shelf, most of them look the same,” Lees says. “Our package is a huge market differentiator, and that’s why it was so important to get it right.”