With rising global populations, food security is an increasingly important concern. Fears of food shortages are a constant threat in certain parts of the world, and these threats are expected to grow. Policymakers agree food insecurity poses a threat not only to human welfare but also to global peace. To help combat this threat, it’s time to take a close look at food waste and at strategies to mitigate the problem.

There is a tremendous amount of food that is wasted on this planet. According to the United Nations’ Food and Agriculture Organization (FAO), 1.3 billion tons of food is wasted annually , or more than 350 pounds of food for every person on the planet. With the many ways in which food is lost or discarded – from harvest through to consumption – it is unsurprising that food spoilage and waste are considered significant sustainability concerns. With the world celebrating Earth Day on April 22, this article will examine the various points across the production and consumption cycle where waste occurs, and outline several processing and packaging technologies that can go a long way to reducing the problem.

The Value Chain of Food Loss
At every point along the process of food harvesting, production, and ultimately consumption, food waste is an ever-present factor. Fruit, for example, is often discarded if it becomes bruised during picking or threshing. Farmers often leave crops behind in fields due to a lack of proper mechanical means of harvesting, or if commodity prices drop sharply and eliminate profit margins. During handling and storage, food items are prone to being eaten by pests, and they are also subject to degradation by disease or fungus.

Food can also be inadvertently wasted during processing and packaging. Unspoiled fruit or grains are every so often inaccurately marked as “not suitable” in production lots and discarded unnecessarily. And during the processing chain there is the inevitable loss of product that is spilled whenever it is moved and transferred.

After food products do arrive at retail outlets, there is a percentage that is spilled, dropped or damaged in the store environment. Some expires—and then discarded—before it can be purchased. Finally, even after foods are purchased and taken home, there is waste that occurs when consumers throw out unwanted food because they prepared too much or dislike the taste, or if it spoils because it is forgotten or not stored properly.

Regional Variations
A country’s economic status can be an indicator of where in the value chain food waste is more prevalent. According to the FAO, more than 40% of food waste in mature economies takes place at points of distribution and beyond, including the time food items spend on retail shelves and with consumers. By contrast, in emerging economies more than 40% of food waste takes place earlier in the value chain, during harvesting, production, handling and storage.

In the United States, 40% to 50% of food waste comes from consumers, and 50% to 60% comes from businesses, according to the EPA. The reasons for food waste vary both at the retail and consumer levels and include in-store “two for one” promotions, particularly for food items with short shelf lives. Retailers often discard food prior to its “sell by” date, or for cosmetic reasons.

Consumer attitudes and behaviors regarding food tell much of the story. In societies where food is accessible and relatively inexpensive, it’s easy to purchase or cook larger food portions than necessary. Additionally, leftovers that are not properly stored can spoil more easily and be discarded.

Families in the U.S. throw away 14% of the food they purchase, which is roughly $600 per year per household, or $46 billion in total. In the United Kingdom, the government’s Waste & Resources Action Program (WRAP) estimates that one-third of all food sold ends up as waste, even though as much as 50% of this food is still edible.

In emerging economies, most food waste is due to infrastructural and technological limitations in production and handling. Farmers often do not have access to robust harvesting technologies. Statistics highlight how these limitations can have a significant impact on food waste. In India and Sub-Saharan Africa, between 35% and 50% of fruits and vegetables are wasted annually. Between 25% and 50% of grain is wasted in Eastern Europe, and as much as 80% of rice harvests in Asia are wasted.

Technologies to Mitigate Waste
Several new technologies developed for use in food production and storage are helping to reduce the problem of food waste. One example is Rapid Freezing, which uses electro-conductive packaging film to accelerate cooling and reduce the size of ice crystals formed upon freezing. Developed by a Japanese consortium comprised of Mutsumi Chemical Industry Co., SUN Electric Co. and Enshu-Kasei Co., this process extends the shelf-life and improves the quality of frozen foods like fish that are sensitive to tissue damage from large ice crystals.

Vacuum packs such as FreshCase® by Curwood represent another technology that is used to prevent costly items such as meats from spoiling. Sodium nitrate is used on film that comes into contact with meat to preserve the bright red color and help prevent it from being unnecessarily wasted, as consumers might otherwise mistakenly think it was not fresh.

An example of another new technology is the “timer label” developed by UWI Technology, an Edinburgh, Scotland-based smart labeling company. This unique label, placed on a container, indicates how long a food product has been opened and therefore when it may no longer be safe to consume. The technology is designed to help reduce the amount of perishable foods that are discarded unnecessarily.

Packaging to Reduce Waste
Food manufacturers and consumers who are looking to reduce the amount of food that is wasted also have packaging choices that can reduce the loss that occurs. Among the numerous formats available to manufacturers, metal packaging offers one of the most effective means of reducing food waste on a global scale.

More than most other formats, metal cans preserve their food contents and offer a long shelf life, significantly reducing the risk of food spoiling before it is consumed. During packaging, food is cooked in the can to destroy bacteria and other organisms that can cause botulism or other types of food poisoning. As a hermetically-sealed environment, a metal can protects foods from pathogens, light, oxygen and humidity. It keeps fruit and vegetables as fresh as the day they were packaged. This is especially critical in markets with a less well-developed infrastructure. In hot and humid climates, transporting food products on poorly maintained roads can lead to a high level of product loss. Metal packaging solves this problem.

The can’s airtight seal is also tamper resistant, reassuring consumers that the food is safe and of good quality. In fact, the food can has an unprecedented safety record. According to the FDA, “There has not been a single occurrence of a food-borne illness resulting from a failure of metal packaging in more than 35 years .”

Metal is also logistically convenient, and it scores points for being sustainable and energy-efficient. Metal cans can be stacked easily and stored without refrigeration in warehouses and shipping containers, and metal offers the greatest defense against bruising and spoiling. Metal is also 100% recyclable without any degradation in quality, so it can be essentially be recycled indefinitely. In regions that lack resources, metal’s inherent sustainability makes it a more affordable and practical packaging option.

A quick look at some food preservation statistics highlights the benefits of metal packaging in reducing food waste. According to the U.S. Department of Agriculture , consumers lose only 7% of canned sweet corn, but they lose 32% and 36% of fresh and frozen corn respectively. Similarly, for peaches, consumers lose an average of 42% of fresh peaches and 35% of frozen, but only 8% of canned peaches.

Global awareness of food waste and its potentially disastrous consequences is growing. As manufacturers and consumers, and even policymakers focus their efforts at reducing the potential for food insecurity on a global scale, some technological solutions to the problem already exist. Leveraging these technologies will help make a difference. 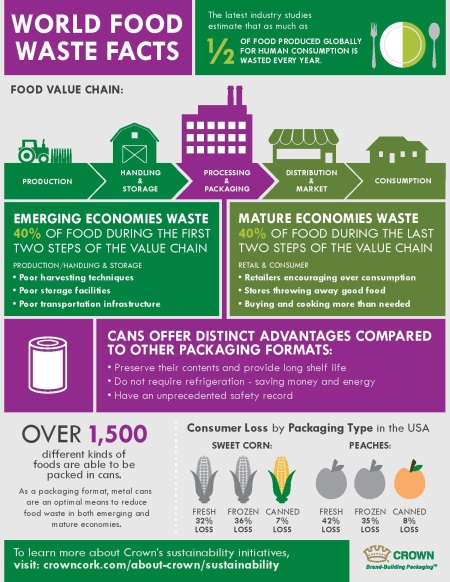 U.S. Not in Agreement with UN to Manage Packaging Waste