Consumers have made it known that they want environmentally responsible products, which extends to the packaging. To that end, the industry is making strides toward giving consumers what they want by moving toward a circular economy. A big part of contributing toward a circular economy, though, is what happens to the materials that make up the packaging once it’s served its purpose and gotten the goods to the consumer. For consumers who live in communities with curbside recycling, it can be inconvenient, and frustrating, to end up with a package that can only be recycled in store drop-off programs or not recycled at all.

A factor that contributes to recycling challenges is mixing different material types to make a package. Such is the case with a popular way to deliver pharmaceutical products to consumers — blister packs.

Traditional blister packs use cavities created from 10-mil-thick (250 microns) polyvinyl chloride (PVC) on one side, and they have a heat-sealed coating of aluminum foil on the other that’s thin enough for pills to be pushed through. However, because the PV and aluminum foil are welded together, the packaging can’t be recycled because the two materials can’t be separated — at least not in a cost-effective way, currently. 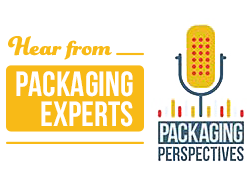 Click above logo for more podcasts Listen to the podcast here

“Our customers were looking for a recyclable alternative,” says Ed Haedt, director of business development at Amcor, “and that’s how AmSky has been designed.”

AmSky is Amcor’s new mono-material blister pack that uses a high-density polyethylene (HDPE) polymer to form both sides of the package. HDPE is one of the easiest plastics to recycle, which makes it commonly accepted in both curbside and store drop-off recycling programs. Being a commodity polymer, HDPE is produced in large volumes. Those volumes help to avoid supply issues that can affect other materials. Plus, it does offer pharmaceutical producers another advantage, “The package is designed to run on traditional packaging machines used for making blister packaging,” says Haedt, which makes it simpler to produce without having to buy new machines or completely retool existing ones.

Functionality, Safety, Aesthetics Of course, being easy to produce and easy to recycle are only part of the conversation. After all, what good is a blister pack if it isn’t functional? “The second objective obviously was to maintain the protective qualities of the package, and that includes the child resistance required on some types of packaging,” says Haedt. “And, lastly, and also very important, is the barrier protection for the medications themselves. Some oral solid medications in pill or capsule format have significant sensitivity to moisture. In order to provide a relatively reasonable shelf life, the packaging materials need to be formulated from high-moisture barrier materials. And it turns out that AmSky does an excellent job and actually outperforms the traditional PVC in that regard. So, we’ve hit on all the functionality, there's really no give-ups.”

"It's quite a technical achievement and it sounds really simple but it's not. It's very, very complex.” – Ed Haedt, Director of Business Development, Amcor

Haedt says that aesthetics are really the only difference between AmSky and traditional blister packs. “The AmSky formed part of the blister is not quite as clear, it has more of the transparency or translucency that a high-density polyethylene milk jug would have. And the lidding, instead of looking silver like aluminum foil it's actually white as it's kind of a white color it's an opaque white it looks a little bit like paper. So, aesthetics are different, which some companies and some of the customers we've talked to feel that it's important to be able to differentiate it so that consumers can tell which is a recyclable blistering which is not.”

Pharmaceuticals aren’t the only products that come in blister packs, so Amcor is currently working with the basic AmSky formulation to optimize it for other applications such as chewing gum, meat, cheese and so forth.

While those other applications are for the future, Haedt says that AmSky is currently going through pharmaceutical qualifications in Europe and North America with plans to launch in Asia and South America shortly thereafter.

Derrick Teal is the editor-in-chief of Food Engineering and former content manager for Flexible Packaging and Packaging Strategies.