This summer, Perrier® Sparkling Natural Mineral Water will pay tribute to Andy Warhol with a series of limited-edition bottles inspired by the legendary pop artist.  In the 1980s Warhol created a series of screen prints of Perrier bottles in a vibrant color palette that will be replicated on specially-designed Perrier bottles available wherever Perrier is sold.

The Perrier screen prints created by Warhol are representative of the Pop Art movement and the artist’s fascination with depicting everyday consumer products in unconventional ways.  He produced over 40 works featuring the iconic Perrier bottle in 1983. 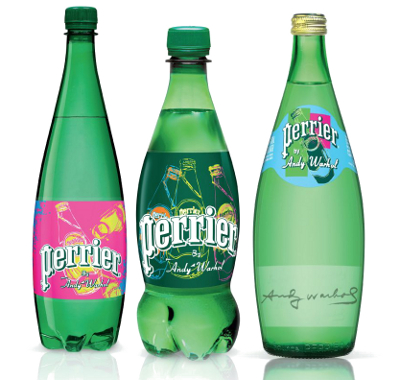 Taking inspiration from these images, Perrier will offer glass bottles featuring four different label designs and seven different Warhol inspirations, including some his most famous quotes: “In the future everyone will be world famous for fifteen minutes,” “Art is what you can get away with,” and “I have Social Disease. I have to go out every night.”  Perrier PET bottles will also be offered with four unique label designs. The limited-edition Warhol series will be available beginning June 24, 2013.

This year, Perrier celebrates its 150th anniversary and its history of pairing the brand with creative artistic talent. “Warhol’s creativity and eccentricity are a great fit with Perrier’s brand personality so this was a natural way to bring the two together,” says Gauthier Gay, International Brands group marketing manager.  “Perrier has a long tradition of involvement in the arts so this is a fitting tribute in celebration of our 150th anniversary.”

“The Andy Warhol Foundation is delighted to partner with Perrier to commemorate 150 years of inspiration and originality by celebrating Warhol’s bold portraits of Perrier from 1983,” says Michael Hermann, director of licensing. “Warhol’s inventive, open-minded spirit lives on through this unique and authentic project which will contribute generously to the foundation’s endowment from which it distributes grants in support of the visual arts.”

In addition to offering the limited-edition Warhol bottles, Perrier is also offering the chance to win an original Andy Warhol work of art as part of the Take Home a Warhol sweepstakes.  From June 24 to

“Andy Warhol once said that Pop Art is for everyone, and by giving away a Warhol piece of art Perrier is keeping this sentiment alive,” Gay says.